This is the best, and yet most unusual, cheesecake in London.

There are two schools when it comes to cheesecake: baked vs no bake cheesecake. I have to side with the latter since my new favourite cheesecake is that of Honey and Co restaurant in North East London and it is non-baked! (Don’t worry, I still  really love a good big and fat slice of New-York cheesecake with some berry compote on top of it).

I had heard about the most amazing cheesecake in London from Cupcake Jemma and I had to go check it out.

You know you’re coming to the right restaurant when the street is empty but the place if busy. That’s where we were: Honey & Co. 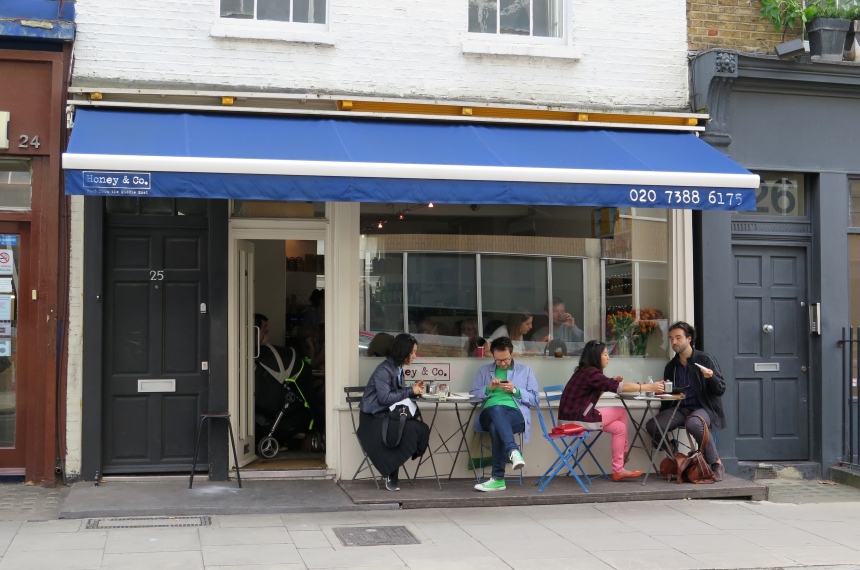 It’s a small Middle East cuisine restaurant with a great ambiance. Nothing like the humongus but empty places you find on Edgware road. The decor is simple, yet appealing. They have shelves with Middle Eastern produce like Tahini, Pomegranate Molasses, roasted nuts and now their cookbook! (they have two actually, the Honey & Co cookbook and the baking book: both part of my collection!)

Savoury wise, we tried their selection of bread with olive oil, whipped feta with fig under the waitress’s recommendation while Julien enjoyed some chicken marinated with molasses on top of couscous.

However, I had come for the dessert and spent the whole time  checking with the waitress onthe cheesecake. I spotted baked cheesecake on display at the back and was slightly worried they might not do the NO-BAKE cheesecake I had heard about. But she reassured me and brought us the dessert menu, explaining that they were different from the cakes on display. Phew! All the desserts looked very interesting. 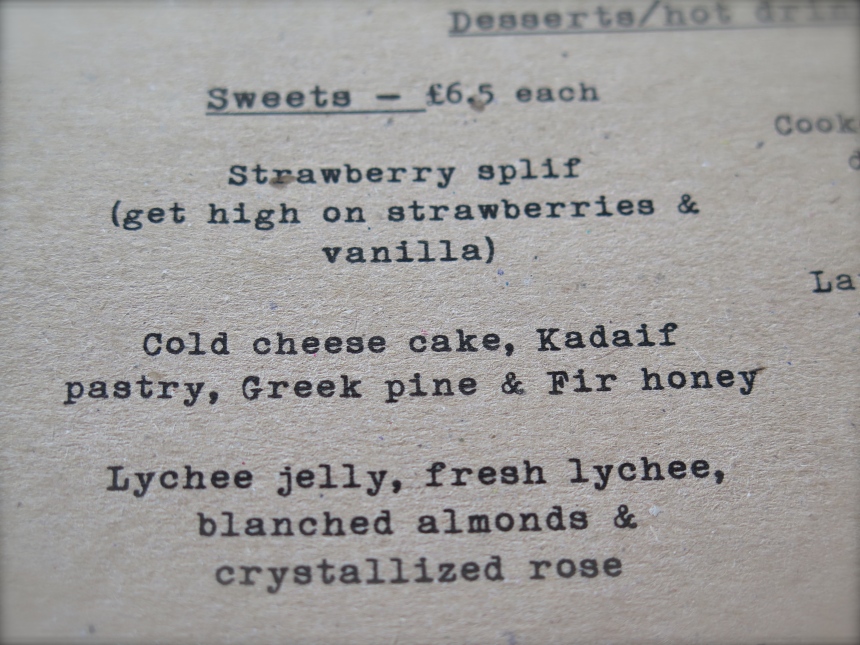 Although I would usually pick a different dessert from Julien so I can taste two, there was no way  I would be content with just a bite of his cheesecake, or that he would even let me have one.  So I made an exception and we both ordered what we had come for: the cold cheesecake on Kadaif pastry.

While we were waiting, the waitress brought me a fresh cinnamon and rose tea. Literally: rose petals with cinnamon sticks in a kettle with hot water. Might sound too simple, but it was beautifully fragrant and warming. If you don’t like rose water, don’t worry: this drink is made with fresh rose and tastes nothing like rose water. Plus, the cinnamon kind of balances it so you don’t feel like you’re drinking perfume ;)

And indeed, it was the best cheesecake in London. Stop looking, and go.
Very homemade looking, on top of a nest of pastry which gives it a great crunch but also adds some originality to the plating, blueberries, almonds, honey and the secret topping: fresh oregano! I know, you probably think oregano should only be on pizza right? Well this combination was the BOMB! I had 3/4 of it and I knew I had hit a wall but kept on eating because oh boy, you don’t get to eat that every day and I was not going to waste a single crumb.

Do you want to know their secret ingredient?… FETA! Yes, this is the only place in London that puts feta in their cheesecake and it is genius!

We took a good 5 minute break after eating, to recover from the mouth orgasm and then walked down Warren Street and had a little walk around UCL.

But I’m getting carried away. Back to my point: cheesecake. The best. At Honey & Co. Make sure to check it out. And don’t miss out on the incredible dessert.